Various reports show that many seafood stocks in Vietnam rose strongly thanks to the news that production and export of the industry recovered significantly since October. This is after a long period of halting production or operating at low capacity amid social distancing measures, seafood processing enterprises are recovering. Orders keep coming while production cannot keep up with export demand.

In September, the Government issued Resolution 128, which provides guidance on the “safe adaptation, flexibility and effective control of the Covid-19 pandemic”. This is to create conditions for resuming production and economic development across the economy, including in the seafood industry. Players in seafood industry said that the Government’s support policies have gone a long way towards helping businesses restore production and export activities as the end of the year approaches, after the latest outbreak of COVID-19 stemmed business activities.

“After Resolution 128 was issued, the Vietnamese seafood processing and exporting enterprises quickly restarted production to complete signed export contracts. The production had been suspended temporarily during the social distancing period,” said Nguyen Hoai Nam, Deputy General Secretary of the Vietnam Association of Seafood Exporters and Producers (VASEP). “But there are still issues, from a lack of raw materials, labour shortages, higher input costs (labour, transportation, equipment for epidemic prevention and production in new conditions), and a lack of capital.”

After slowing down in the third quarter due to the impact of Covid 19, business activities of enterprises in the Mekong Delta, including Minh Phu Corp (MPC), VASEP reported that have been active again since October. Minh Phu has started a chain of 3 processing factories. seafood processing plants, including Minh Phat, Minh Quy and Minh Phu with the same capacity of 18,000 tonnes/year and Quang Minh Packaging Factory with a capacity of 5,000 tonnes/year.

Shrimp processing factories in the Mekong Delta all have to produce according to the “3 on-site” option combined with “1 route, 2 destinations”, which has reduced shrimp processing capacity by 30-70%. , could not fulfill the orders for customers, leading to a decrease in revenue.

However, the demand of major shrimp export markets in the world increased, helping Minh Phu  with better selling prices and higher profit margins. For the first 9 months of 2021, Minh Phu recorded net revenue of VND 8,887 billion, down 11% and profit after tax of VND 544 billion , up 14% compared to the first 9 months of 2020. It has received more than 3,200 employees inside and outside Hau Giang province back to work since mid-October. Returning to work will help MPC increase productivity, meet customer orders, and be the driving force for growth during this period.

By the end of October 2021, seafood exports of Minh Phu reached USD 323 million, accounting for 4.56% of the total seafood export turnover of the country. Export markets are over 40, including key markets such as the US, Japan, Canada, Australia, the Netherlands, Russia and many other markets.

In September, Lê Văn Quang, General Director of Minh Phú Corporation told Seafoodsource.com that the company was focusing on processing large-sized shrimp (10-45 shrimps/kg) thanks to the European market’s preference.  “The demand for large-sized shrimp is super high, thus, we are packed with orders from now on until the end of the year. What we are most concerned about is the ability to increase capacity. Besides, the US also needs that kind of shrimp. We can sign contracts respecting selling hundreds of containers of shrimp (40 shrimps/kg) if the product is well operated.”

In spite of high demand from other big markets, Minh Phu is only able to sign contracts that sell 50 -70% of the factory capacity.  Minh Phu  had advised farmers to focus on farming large-sized shrimp by reducing the stocking density  to 100 – 120PL/m2 and decreasing by 250 PL to 350PL/m2. Quang has also advised farmers to start farming with the aim to harvest in November, so that factories would have enough time to process and sell shrimp to the US and Europe within this year.  For shrimp harvested after November, he said that exporters could sell them to Asian markets, including Japan, Korea, China, Taiwan and Hong Kong.

Meanwhile, Vĩnh Hoàn Corporation (VHC) has just decided to add another VND145 billion to Feed One to build a seafood processing plant. Previously, it planned to spend VND1.3 trillion for investment in 2021, of which VND700 billion was spent on building an animal feed factory and Vĩnh Hoàn hatchery, and getting land ownership for a high tech agriculture and aquaculture complex.

In the first three quarters of the year, Vĩnh Hoan recorded net revenue of VND6.4 trillion, up 24% and net profit of VND647 billion, up 17%. With the business results, the company has fulfilled 74% of the revenue target and 93% of profit after tax target for the whole year. It is expected to easily complete the business plan thanks to the bright prospects of the export market at the end of the year.

Seafood exports
VASEP said that after declining for two consecutive months, the value of seafood exports reached USD 918 million in October, up 47% compared to September. By the end of October, the country’s seafood exports climbed 2.4% year-on-year to USD 7.1 billion. US the largest export market for Vietnamese seafood, accounting for 24% of the total export value at USD1.7 billion, up 25% year on year. 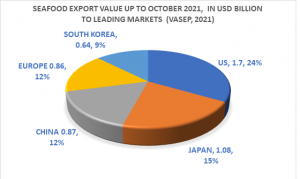 The demand for seafood import markets is still high and domestic seafood processing activities are resuming.  US and EU markets have quickly recovered thanks to vaccination and the economy has almost completely re-opened. The Australian and Russian markets also have increased import demands, due to a decrease in domestic output. Demand for shrimp imports from these markets, especially large-sized shrimp, is very high from now until November to serve Christmas.

Lower freight prices, higher orders
Seafood enterprises are trying to overcome difficulties to increase output at the end of the year. Agriseco said that since the beginning of October, sea freight rates are cooling down with a decrease of 50% in Baltic Dry index (BDI), which will help businesses reduce costs in the fourth quarter.

Demand from export markets continues to grow as economies reopen. The RCEP Agreement is expected to be approved and come into effect in the beginning of 2022, opening up more potential export markets for businesses. The Ministry of Industry and Trade reported that for the rest of the year, demand for shrimp in the European and American markets has been bouncing back. In addition, incentives on tariffs such as in the Viet Nam-Europe Free Trade Agreement (EVFTA), will continue to help Vietnamese shrimp products be competitive in the European market.

With flexible measures in production and pandemic prevention, shrimp processors and exporters in the Mekong Delta have come a consensus to fulfill their export targets for 2021. The export value of shrimp is predicted to reach about USD3.8 billion, up 3% year on year. Meanwhile, the export of tra fish is likely to earn USD1.5 billion, equal to last year’s turnover, and seafood exports are predicted to drop three per cent to  USD3.1 billion. Sources: VNA; Vasep; Vietnam News, Vietnannet,